Showing posts from January, 2011
Show all

Direct Response Cable Television Comcast is now selling products via a direct response advertising unit that appears at the bottom of a viewer's television screen. The advertisement pops up for a few seconds during a commercial and gives viewers an offer that they can accept or dismiss by using their remote control. (See the video above.) My wife and I were offered a free brochure about visiting Scottsdale, Arizona and we elected to have one shipped to us by following the prompts on the screen with our remote. My wife had seen a direct response ad for a bottle of lotion the previous day. In that ad, she could have chosen to receive a bottle for $5. I can only assume that the $5 charge would have been added to our monthly cable bill. We saw this new advertising unit at 7:45 p.m. on the SOAP network on a Wednesday and a Thursday. We have not seen it on any other channel or at any other time of day. We recorded the ad via our DVR, but when we played it back, the offer was not at
2 comments
Read more

What Lady Gaga Should Wear to the Grammys 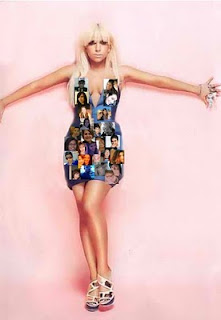 10 Thousand Pictures Say 10 Million Words Lady Gaga should wear a dress to the Grammys composed of nothing but 10,000 photos of her fans. (Click the example on the right.) Last year, she famously wore a dress made of raw meat . This year, why not honor her fans by wearing their pictures on her dress? Lady Gaga is very close to her fans. She calls them her “Little Monsters” and many of them dress in elaborate costumes when they attend her concerts. Her devotion to her fans is one reason she has become so successful. In marketing, it’s important to show love to your biggest fans — your customers. Give them opportunities to provide input about your new product ideas. Allow them to submit feedback and then post that feedback publicly. Send your customers hand written thank you notes. And let your fans submit photos of them using your products. Add This To Your To-Do List Show some love to your fans! Every business has repeat customers. Give them ways to show their love for you by sp
2 comments
Read more

January 09, 2011
A Very Merry Christmas Close to midnight on December 24th, 2010, SpanAir surprised passengers with Christmas presents delivered through a baggage carousel. Every gift was hand wrapped and addressed to each of the flight's 190 passengers. I applaud the airline for employing such a fun idea to spark positive word of mouth. The airline has put together videos of the gift-giving event in both English and Spanish, and they have combined for a half a million views on YouTube to date. What would it cost for Spanair to buy a half a million brand impressions on tv? Certainly more than what it cost them to give out 190 Christmas presents and put up a video on YouTube. This was a win-win situation for both Spanair and its passengers. The most powerful form of marketing is a recommendation from a friend. With these presents, Spanair made 190 people happy and found a way to get those people to tell all of their friends and family about how great Spainair is. Then they put up a great vide
1 comment
Read more
More posts